Finally, it happened. The Dating Wizard took the guys out for a night on the town, to show them how it's done.

Roger, a high-tech marketing manager, Wayne, a space planner for a high-tech firm, and Erik, a teacher, focused their efforts on the downtown nightclub district, with Michael a.k.a. The Dating Wizard as their guide...

And what did they learn from the Wizard?

"A lot," says Erik. "...You have to go out there with a no-holds-barred attitude and start talking to women. "I've gotten over a lot of my fears. I have a more light-hearted attitude..."

"Roger took what he learned from the Wizard out to a bar recently and came home with several contacts. "This is an earth-shattering achievement for me, so I'd rather neither I, nor the approach, be disparaged. ...

Somewhere between the end of December and the start of this month, the bars seem to have exploded and online dating sites have surged with new users.

Perhaps it’s everyone who has made it their resolution to change their single status in the new year. Whatever the reason, January seems to be the time when people are hitting the singles circuit.

Even airports are breeding grounds for romances, with nearly one in 10 adults saying they have met or know someone who has met a date at the airport or during a flight, suggests a StrategyOne survey done on behalf of AXE body spray.

Toronto dating coach Michael, A.K.A., the Dating Wizard, says public transit can also be a good place to meet singles. He should know — he met his last girlfriend on the bus and his current one on the subway. For those of us who feel a little strange about approaching a stranger, Michael suggests starting the conversation around the situation.

“On a bus that is moving one mile an hour, you can say something like, ‘Excuse me, do you have any light reading, something like Encyclopedia Britannica, just to last me until I get to my destination?’ This kind of stuff is good because they can relate to the situation,” he says.

Other places that hold promise, according to Michael, are coffee shops, where people are likely to be hopped up on caffeine — an automatic mood booster; the bookstore, allowing for a built-in conversation starter; or even standing in line in places like the bank, which offers a few undistracted moments of the person’s time.

Even a short elevator ride can bring about the opportunity to meet someone date worthy.

“In those situations, I would try to keep the conversation going even after we get off the elevator,” says Michael.

This, he says, gives both people the extra time necessary to see if it’s warranted giving out or asking for that phone number after all. 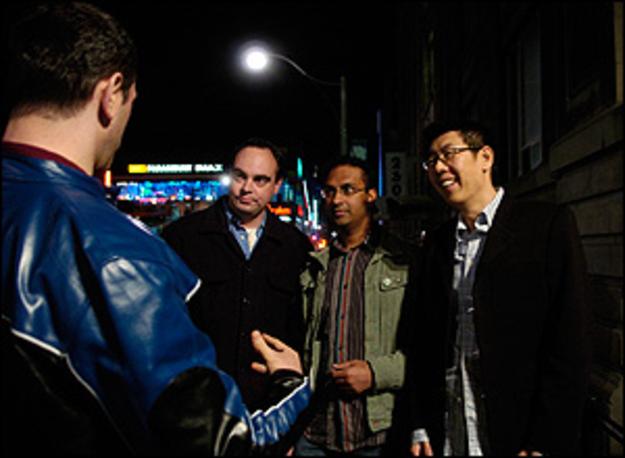 Somebody to Love
By Valerie Gibson

How come T.O. guys say they can't get a date?

Since it's been said there are two single women to every man in the city and surrounding area, why do a lot of men still complain they "can't meet anyone?"

Okay, to be fair, I'm a single T.O. woman who also complains about the difficulties of getting a decent relationship in the city. But I've got good excuses. I'm older and -- gasp! -- a tabloid sex columnist!

Both facts are enough to frighten the pants off, so to speak, any  male, although, heck, even that would be a start as far as I'm concerned.

"Women only want rich guys/bad boys/successful executives/handsome guys, etc. etc." is the tired response that too many men offer up as to why they're sitting at home eating pizza and watching telly instead of dating a hot woman.

The Dating Wizard dismisses such negativity.

"It doesn't matter what a guy looks like, it's how he projects himself and his personality that counts with women today," he says.

He's Michael Marks, whose thriving business is teaching single men of any age how to get that woman. And he says his methods work.

He says the reason most men can't get a date is they have no idea how to approach women and not only get their interest, but retain it.

"Women want to be made comfortable," he states. "They want a man to make them feel classy so it feels more than just a pick-up. How a guy does that is through confident verbal and body language."

He says the biggest mistake a man makes when approaching a woman is to try too hard to impress them about himself. And he insists guys are rejected not because of how they look (although good grooming, he says, is essential), but because of their lousy technique and lack of personality.

He advises men to make the approach first as he's convinced women still prefer this. He says they should relax and make the initial approach light. His advice is to start a neutral (no controversial subjects), interesting conversation. They should also show they have a sense of humour.

But the Wizard is adamant this doesn't mean the single guy has to act like a clown, as that will immediately put women off. Humor "should be part of himself and be included occasionally in the conversation to keep it light."

He also shoots down the argument that it's tough and intimidating to meet women when they're in groups.

Far from being a negative, he declares, this can be a positive situation. "Women in groups are far more relaxed and aren't threatened by a guy coming up to them because they're with their friends. If he gets the group involved in having a great conversation, he can control whatever will happen."

"Having control, dominating the action and projecting personality and superiority instead of inferiority" are key concepts in The Dating Wizard's techniques for dating-challenged men.

He says although it sounds retro, it's effective and results are consistent. He teaches his secrets via seminars, even consultations by phone or one-on-one "out in the field" with him.

"Toronto is known as a tough place to (get a) date, but it isn't. Guys just don't have the skills to attract the women they want. But they can learn."

“A man approaches a young woman at a sunglasses counter in a Toronto mall and says, “You’re in love with yourself.”

The woman is surprisingly receptive…This was his “first approach” to a woman after a self-professed ‘dating wizard’ spilled the beans to him and a handful of other men about “what women want.”

A few years ago, (Michael) became fed up with not meeting women and with reading dating book after dating book. He did some serious research – four years worth…(and asserts that) “The reality is…women are not attracted to equals, never mind inferiors… Women are sexual beings, just like men are sexual beings. But men try to appeal to women on these non-sexual, very logical terms..."

Above Excerpt from Trying Ping-Pong Conversations  by Judy Steed

"It's an interesting time in which we live, when sexuality is supposedly so liberated and easy. But in many ways it's harder than ever for men to connect with women."
-The Dating Wizard.

Excerpts From Major Newspapers And Publications: